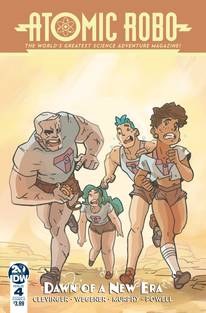 Atomic Robo just opened Tesladyne Institute's doors to the next generation of Action Scientists. Meanwhile, an old comrade has an urgent message about the Vampire Dimension: it's bad. Bernie might be speaking with the real Queen of Hollow Earth, instead of a hallucination? Jury's still out on that one. Oh, and y'know the subplot about Robo's secret robot son? Well... it's fine. Everything's fine.